How to build your Twitter followers and keep their attention

You can love it or hate it, but you can’t escape the fact that Twitter is an essential business tool for any company with online visibility. In reality, many people simply don’t understand Twitter, so leave it alone in favour of one of the more familiar platforms. However, if you take a hold of it, Twitter is an awesome lead generator. So I’ve decided in this post to share my secrets how to increase your followers and what to do with them once you’ve won them.

Hashtags were created by Twitter and have been adopted into the language of modern culture. You see and hear them everywhere, but they only work on Twitter (and Google+, kind of, but I won’t go into that). I see hashtags being used on Facebook all the time, but they don’t serve a purpose there; on Twitter hashtags are a search mechanism and something that can be used to great advantage.

There’s 2 ways you can use hashtags:

This is how it’s done. Choose a hastag relevant to your industry, I’ll go with #blogging. Carry out a Twitter search for #blogging and you’ll be shown a list of search results of tweets which include this hashtag. All you have to do is work down the list (be as selective as you want) favouriting tweets as you go. This strategy works on a conversion rate of approx 3%, so if you want 1 new follower, favourite 30 tweets, if you want 10 favourite 300. It really is as easy as that. Depending how relevant your hashtag is in relation to your Twitter Bio will determine the strength of conversion. 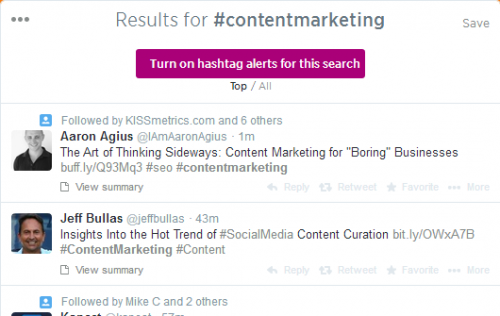 Because hashtags are an accepted search mechanism on Twitter, lots of people use them. Therefore, if you don’t use hashtags in your tweets you have much less chance of getting seen than if you had. By inserting #blogging into my tweets, I will be seen by anyone who searches for that hashtag. Clearly, they are looking for information on ‘blogging’, so could be a possible business alliance or potential new customer. If I didn’t use the hashtag they won’t find me.

If you’re not sure which hashtags to use, try one of my favourite tools www.ritetag.com

You’ve spent a few hours on Twitter and now have a few dozen new followers. You’ve checked out their bios and they are all genuine accounts who are involved in one way or another with your industry. In other words, you have a perfect audience. What now? Well, the next stage is to create some rocking content to share with them. That way you will be seen as a thought leader, you’ll start getting requests to speak at this conference or that expo and your brand awareness will go through the roof! But, before you get ahead of yourself and chuck all your money and resources into content, there’s something else you can do really quickly…

Use lists to forge relevant bonds

Twitter has a little used feature called Lists. It’s a simple concept, create a list, add people who follow you to it, and you have a convenient way to filter out all the noise. That’s great and pretty useful, but what’s even better (imho) is that when you add a follower to a list they receive a notification.

So, let’s say I have a follower I want to do business with but I just can’t seem to get his attention, I add him to a ‘flattery list’, i.e. one which will make him feel good about himself, such as ‘My Top Bloggers’.

He will then receive a notification which reads: Matt has added you to his list ‘My Top Bloggers’ – how good is he feeling right now? And who is he thinking about while he’s feeling so good? That’s right, me. If I didn’t have his attention before, I have it now.
Now, you can invest in that content you’ve been thinking about and when you’re ready to share it you have a targeted list of Twitter users to send a tweets something like this: 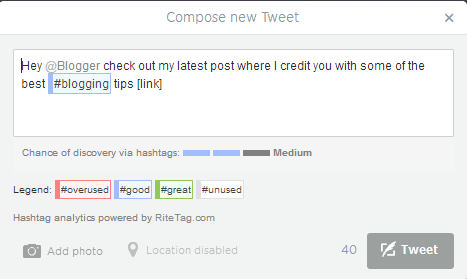