With headquarters in San Francisco and offices around the world, Tapjoy is a mobile advertising platform with a difference. Via the Tapjoy Mobile Value Exchange®, Tapjoy creates a unique relationship between mobile app developers, mobile app users and advertisers. Tapjoy’s core tenet is the rewarded advertising model, which makes it easy for developers to make money in their application by offering consumers a way to get in-game currency by engaging with an ad.

Reaching more than 450 million mobile users every month, Tapjoy delivers unrivalled opportunities for both app developers and advertisers, while offering app users access to premium in-app content in exchange for engaging with advertisements of their choice.

How Tapjoy Works for App Developers

In a world where creating a popular app no longer automatically means monetary success, Tapjoy offers app developers a way to monetize their creations while avoiding annoying their users with unwanted adverts. Overloading users with unwanted pop-up and banner ads can often lead to the user getting fed up with their play being interrupted. They may even consequently just delete the app. Tapjoy offers users the CHOICE to view an ad in exchange for access to premium content, including extra lives, coins or power-ups. This creates happier users and MORE users for developers – a win-win.

Trends show that app users are becoming less and less likely to pay to download apps. Additionally, with so many horror stories about staggering bills for in-app purchases, users are becoming more and more cautious about their in-app spending. For some app developers these in-app purchases are their only form of revenue. In contrast, using Tapjoy’s Mobile Value Exchange®, the developers can gain substantial monetary reward every time a user chooses to watch an advert. Users earn virtual rewards, while the app developer earns real money.

The world of mobile advertising may seem complicated at first, but Tapjoy makes it easy to get started on making money from your app. All it takes to start is to integrate Tapjoy’s SDK with your app.

As well as gaining revenue from other companies advertising in their apps, developers can use Tapjoy’s intelligent advertising platform to advertise their own games in other apps.

Tapjoy works on a “Pay for performance” basis (similar to Google’s Pay-Per-Click method) whereby the app developer only pays if a user chooses to download the app. Tapjoy takes the risk out of advertising your mobile app – you only pay for what you get.

The video below shows how Tapjoy works for developers and can help to increase their revenue by on average 60% in Android and 40% in iOS.

How Tapjoy Works for Advertisers

It is no secret that more and more people are using their mobile devices every day to interact, make purchases, read the news and play games (amongst other things). People all over the world use their smart phones and tablets almost everywhere: on the bus, while shopping, while watching TV and even in bed. Mobile has become one of the most important methods of consuming media, and people spend, on average, two hours a day using their smart phones and tablets. A massive 83% of that time is spent using apps.

How advertisers go about taking advantage of this growing marketplace varies. Some choose the bombardment route, flashing banner ads at every opportunity, paying app developers huge sums to advertise on their popular apps. Others choose a smarter, more cost effective route – the Tapjoy route.

Instead of bombarding and, consequently, annoying prospective customers, Tapjoy’s Mobile Value Exchange® offers advertisers the chance to give prospective customers what they really want. It is very simple – a user is enjoying an app but needs extra in-app currency to unlock a new level or open premium content. Instead of paying with real money, the user is able to select and view an advert and, in exchange, get these extra app features for free. Users earn VIRTUAL rewards; advertisers earn REAL customers.

By inviting them to choose which advert to watch, advertisers access users who are genuinely interested in what they are viewing. This increases conversion rates massively and offers significant return on investment for the advertiser.

Tapjoy works with more than 8,000 mobile apps each quarter and has a reach of more than 450 million mobile users every month. That is 450 million users that could CHOOSE to view your advert, sign up to your mailing list, or download your app. It is no surprise that countless companies, large and small, are making Tapjoy a priority in their marketing strategy.

Tapjoy’s Pay-for-Performance model also means that advertisers are not wasting their marketing budget on targeting customers that may never see their offer, relate to it, or respond to it. By reducing the risk of waste, advertisers using Tapjoy will only pay when a user has completed an action. That action could be signing up to a mailing list, calling for a quote, or simply viewing their advert. By becoming part of Tapjoy’s marketplace, advertisers can gain access to over 450 million mobile users, but only pay for those who are interested. Tapjoy’s marketplace is targeting at its best. Where else can an advertiser grab people who actually choose to hear their message?

Advertisers on Tapjoy’s marketplace can also benefit from end-to-end campaign management. Tapjoy can track, measure and report on an advert’s performance. And, with their extensive knowledge of the mobile advertising marketplace, Tapjoy can offer suggestions to the advertiser on how to improve upon their message, make the most of their advertising opportunity, and increase conversion rates. On top of that, Tapjoy can produce the advert or offer and make sure that the right messages are being received. Some of the many solutions offered to advertisers are listed below.

Tapjoy Rich Media – In a single ad unit a prospective customer can be driven through the entire purchase experience, from awareness right through to purchase and loyalty. Rich media ads offer interactive experiences for the user, including in-ad games and product customization. For example, car advertisers can use rich media adverts to enable the user to build their own customised car that they will be more inclined to want. With an enticing call to action at the end of their experience, the advertiser is being handed warm, engaged customers who will be much more likely to convert to purchasers.

Tapjoy Marquee Video™ – Advertisers are given the option to have a stand-out, featured advert running across the top of the Tapjoy marketplace, offering high-impact exposure.

Tapjoy Video Plus – Engaging videos are an advertiser’s best friend. Video advertisements get prospective customers interested and fully engaged. Tapjoy advertisers will only pay if the video is watched right to the end. Customisable calls to action at the end of the video will drive the customer through to follow the company on social media, sign up for a newsletter, request a quote, or even make a purchase.

To find out more about how Tapjoy works for advertisers take a look at the video below.

How Tapjoy Works for App Users

Anyone who is addicted to the latest app will know how frustrating it is to be just a few coins short of buying the tool that will help you to finally crack the level you have been trying to pass for over a week. Or, how annoying it is to run out of lives just as you’re about to set off on your hour long commute. Instead of racking up a huge in-app purchase bill, Tapjoy offer users invaluable rewards in exchange for (for instance) watching an advert or signing up to a company’s mailing list. By being able to choose which advert they interact with, they are likely to enjoy and remember it more.

Everybody likes to get something for free, and whether the user needs virtual coins to buy a new vehicle for their game, wants to watch a full length film for free, or wants access to premium content, by clicking a button to access the Tapjoy marketplace they can gain these rewards without having to spend a cent. Most app users understand that the app developer needs to make money somehow. By having the choice of when and how to view adverts, the users will actually find the Tapjoy Mobile Value Exchange® rewarding – not an annoyance. 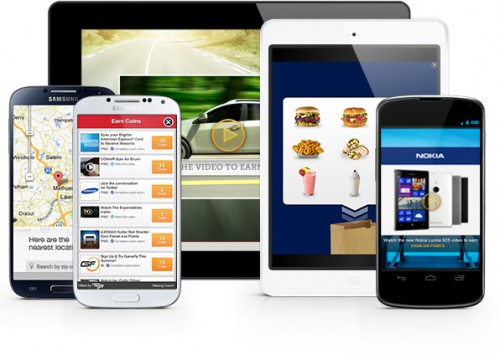 What is so special about Tapjoy?

As well as offering an unrivalled model that connects the three interested parties in the mobile world, Tapjoy offers other tools to help make this process even smoother.

For developers Tapjoy offers extensive resources and insights to help keep abreast of the ever changing marketplace. For advertisers, Tapjoy offers up a fantastic creative production department that the advertisers can make use of to create the most stunning, engaging and unique messages that will leave a lasting impression on the user.

It is almost impossible to please everyone, but with Tapjoy’s Mobile Value Exchange® model, they come pretty close.

Backed by top-tier investors, including J.P. Morgan Asset Management, Rho Ventures, North Bridge Venture Partners, InterWest Partners, and D.E. Shaw Ventures, Tapjoy has been able to make waves in the digital marketplace. By offering incentives to all parties involved in the advertising chain, Tapjoy has been able to massively increase their reach. Now boasting a reach of more than 450 million mobile users every month, Tapjoy has become a market leader in the ever-changing world of mobile advertising.

Who’s who at Tapjoy

Tapjoy boasts an impressive executive team and board of directors, bursting at the seams with experience and knowledge of the mobile world. Backed by president and CEO Steve Wadsworth, former president of Disney Interactive Media Group (DIMG), the executive team consists of Chief Marketing Officer Peter Dille, Chief Product Officer Jeff Drobick, and Chief Financial Officer Matthew Service. Christine Tao is SVP of Global Developer Relations and is responsible for fostering and growing relationships between Tapjoy and app developers. Paul Longhenry is responsible for the direction and execution of strategic partnerships and M&A efforts.

The board of directors team includes Warren Jenson, Robert Callahan, and Mark Leschly amongst others. The wealth of experience, intelligence, and acumen amongst Tapjoy’s executive team and board of directors has overseen the growth of Tapjoy from start-up in San Francisco to having locations all over the world and employee numbers totalling over 300.

For more information on Tapjoy visit their website at www.tapjoy.com